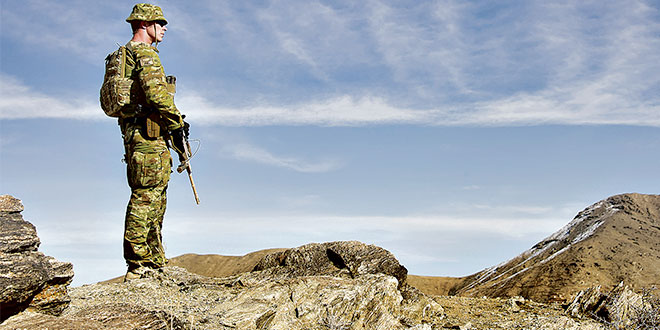 IT’S a shocking, whispered truth about our modern military – far more of our veterans take their own lives after returning home than are killed during overseas operations. In the last few weeks, two more veterans took their own lives – the toll is more than 260 since 1988, compared to 46 listed as fatalities in conflict, according to the Australian Veterans Suicide Register. “It breaks my heart, it’s tragic, it’s simply hard for people to comprehend,” Deacon Gary Stone, who is chaplain to the ex-service community in the Archdiocese of Brisbane, said.

Deacon Stone is a veteran of recent operations including Iran-Iraq, East Timor, Bougainville, the Asian tsunami, Solomon Islands and Timor Leste. “These are men who have been to war, endured tough things,” he said. “It is the coming back, the reintegrating into life that’s difficult.”

Deacon Stone said there were many complex triggers.

“They are discharged from the military, they can never be a soldier again, and this can be a source of shame for some if they can’t find a purpose,” he said. “Sometimes its moral injury; thinking they could have done more, or not enough. It’s survivor guilt. “Veteran suicide happens when they haven’t got hope. Either they are not in touch with God, or feel they can’t be forgiven. “I tell them ‘God loves you’ and you can be forgiven. “God made you for a purpose, and you have purpose yet. There’s nothing God can’t do.”

In recent years, Deacon Stone has ministered to thousands of war veterans with mental health conditions.

At the same time he has to cope with his own post-traumatic stress. “There can be a whole range of issues at play; physical and mental injury, “ he said.

“A majority of veterans don’t respond or don’t want medication, and that can be the same for cognitive behavior therapy from a psychologist.

“Often veterans are reluctant to talk to civilians. But they will talk to veterans (some of them are pastoral care trained). It’s a fraternity.

“The key is a truly holistic approach, and part of that is spirituality. “They could be asking ‘Do you believe in God, Do you have a faith.”

Last year, Deacon Stone, responded to the need by setting up a ministry known as Veterans Care.

Brisbane Archbishop Mark Coleridge enthusiastically supports it. “A lot of this is hidden. It’s unrecognised and hidden,” Archbishop Coleridge said. “The culture is increasingly unsure about the need to attend to the spiritual. That is not recognised in a way that it once was. “Secondly, the Church’s presence in the military is not what it was.

“There is a lot of suffering going on out there and it goes unrecognised because perhaps people don’t want to recognise it because it’s going to disturb their peace of mind and comfort.”

Deacon Stone engages with thousands of ex-servicemen and women through the Veterans Care Association, to provide spiritual-based pastoral care as well as education in holistic health.

The Association has an expanding team of chaplains and pastoral carers. And its work extends to caring for families in crisis. “We have been helping families abused and abandoned by aberrant veterans, including assistance in court actions,” he wrote in a VCA newsletter. “For many, it is the only spiritual ministry available,” Deacon Stone said.

“The Department of Veteran Affairs hasn’t embraced spirituality as a component of their treatment regimes. “Some of the medical and psychological fraternity seems reluctant to embrace a holistic approach which includes spirituality as a treatment.” Every week Deacon Stone said he heard from veterans who say they have turned back to God and the Church as a result of the ministry.

This article appeared on the Catholic Leader website: http://catholicleader.com.au/news/unspoken-military-truth on the 17/2/16