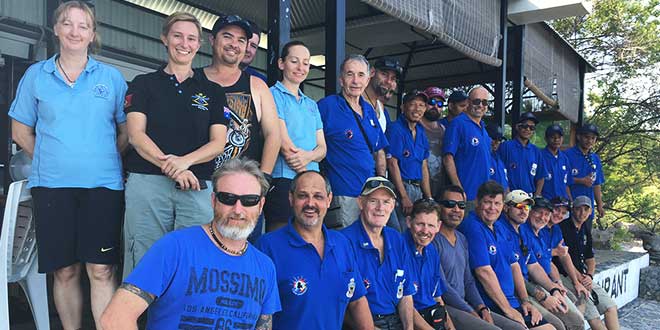 A LEADING clinical psychologist has praised the “quality healing” of the rehabilitation program Timor Awakening, which is helping veterans deal with PTSD, substance abuse, isolation and thoughts of committing suicide.

Brisbane-based Dr John Barletta, who volunteered as a consultant on the Timor Awakening program, said “it has been inspiring to see veterans and leaders connect, support, guide, challenge, and educate one another” and “regain a sense of worth in their lives”.

The one-year program, led by Deacon Gary Stone and the Veterans Care Association with support from RSL Queensland, includes an innovative immersion experience for veterans in Timor Leste, a country where many younger veterans have served.

Greater support for veterans has been identified as a national priority to deal with PTSD, depression, anxiety, and alcohol and substance abuse, as well as a staggering suicide rate amongst the veteran community.

“The veterans, though wounded in certain ways, have been quite willing and able to use their relative strengths to be future-focused, and work on integrating their learnings from Timor Awakening to change their lives toward greater health and wellbeing,” he said.

Dr Barletta said veterans visiting Timor Leste (for most, many years after they served there) were able to see that their efforts “amidst the pain and destruction and suffering” had resulted in change and created hope in people’s lives.

“Even on the very first day in Dili, our veterans were able to say ‘what I did was worth something’,” he said.

“For a lot of the veterans the most powerful thing was seeing children, bathed and well clothed and learning in schools. This is the next generation in Timor, and it really touched our guys to see their contribution as servicemen had helped create this.

“It is part of our existential life to be in the service of others. It’s an achievement – part of living a full life.” Dr Barletta said for many veterans, medically discharged after their national service, each day was a challenge.

“How do we get them engaged?” he said, noting that it was often a cultural struggle for veterans to blend back into Australian life.

In his talks to veterans, Dr Barletta said he explained it was their responsibility to build in positive experiences each day including an exercise regime, attending to their psychological and relationship wellbeing, developing hobbies and voluntary work.

“And I would say ‘this stuff is not going to happen by miracle. You can cross your fingers, you can pray’. Hope is wonderful, but at the end of the day hope is not a strategy. There needs to be a plan,” he said.

“What you need to put in the cross-hairs are routine patterns and habits – because when you do the life-giving stuff, that becomes the new normal. And that fills the neural pathways to your brain – through the routines, repetition and deliberate practice.”

Dr Barletta said part of the challenge of suicide prevention is harnessing the “grit, determination and ‘stickability’ which military personnel develop through their service and having those dimensions come to the fore in their civil life.”

Dr Barletta said he would continue to work with the Veteran Care Association team, which consisted of two psychologists, a nurse, as well as Deacon Stone and his son Michael Stone, a former army major.

“Let me reiterate … I believe that the program has sound psychological underpinnings, and with further work will be even more proficient at catering to the complex needs of veterans,” Dr Barletta said.