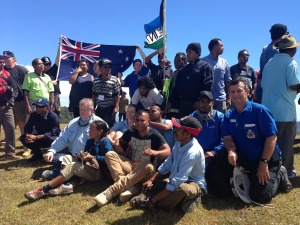 I am a veteran managing depression. For many veterans like me, mental illness is a private nightmare that becomes a public humiliation as well as a disaster for loved ones. The consequences include relationship breakdown, substance abuse, unemployment and suicide. I have been publicly humiliated by my illness. I am divorced. I have lost my job. I am managing my illness much better now and have another job. I am writing to share the effects of the Timor Awakening program on me and others.

After 40 years in uniform, finishing as a Colonel, I have re-joined a brotherhood and sisterhood once again with the common purpose of fighting our mental illnesses by helping each other. Timor Awakening is a high-risk program that reaches out to mostly high-risk veterans. I participated in the first Timor Leste immersion experience in July 2016. The program design was sound and veterans, especially some who had ‘closed down’ in despair, completed the 11-day program strengthened and committed to getting well again, knowing that they were not alone in the ongoing battle. They rediscovered mateship on the roads of Timor Leste and were both inspired and strengthened by the stories of resilience from Timorese Resistance veterans who accompanied them.

I was one of those who found Timor Awakening to be a turning point. I am an InterFET veteran, who returned to Timor Leste several times after 1999, both in uniform and as a UN volunteer. Like a number of others on this first Timor Awakening immersion experience, I found that first-hand experience of Timor Leste’s revival and observing people going about their business happily was cathartic. This was true of the second trip in September when several veterans who had served in Timor Leste achieved closure from the cumulative experience of service there, as well as specific traumatic events they experienced.

The second Timor Awakening trip applied the lessons of the first. I facilitated discussions that resulted the group committing to responsible use of alcohol, safety protocols and ‘calling others out’ who broke any of the agreed rules for personal behaviour. The Timor Awakening design was confirmed and enhanced on the second trip. Timor Awakening draws the group together in common purpose and takes everyone out of their ‘illness zone’ and commits them to a quest. The quest is to represent Australian veterans in the company of Timorese veterans to help them engage with communities and establish an RSL-like organisation with supporting legislation in Timor Leste.

Whilst doing so, the Timor Awakening group took time each evening to share in open forum the daily impact of this quest. The amazing impact of travelling around Timor Leste in convoy, participating in traditional community welcomes and listening to testimonies from Timorese veterans was not only binding and bonding the group to the quest but also building sufficient confidence and trust within the group to change tentative and ‘closed down’ individuals into team mates who could share their most personal reactions to the day’s events. Without prompting, many committed to emulating the resilience of Timorese veterans and reciprocating the generosity of the Timorese people and veterans by returning to Australia and contributing to the Australian veteran community.

At the end of the second trip I interviewed several participants who I had spoken to on the first day in Dili. The results were similar.

Most had a sense of accomplishment. All had made new friends whom they would maintain contact. All were uplifted and committed to a better future for themselves and their loved ones. This substantial effect was to be confirmed in the Timor Awakening Facebook closed group interactions subsequently. Alcoholics were exercising. Those with depression were travelling and sharing positive experiences. Those with PTSD were exploring new techniques for achieving wellness and better sleep. Even I returned to interacting on Face Book after three years of non-participation.

In summary, Timor Awakening binds, bonds and builds groups of self-helping veterans by taking them away from their current circumstances and immersing them in a different place with different culture. Through mateship and a quest it recreates a military family and a sense of worthiness and belonging. These effects not only reduce the chance of self-harm but also build bridges of hope to more productive futures.