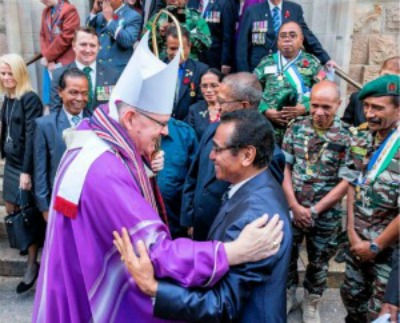 CLOSE ties between Church and people are a legacy of last month’s Anzac Day visit to Brisbane by Timor Leste’s new leader accompanied by war veterans.

It was the first visit to Australia by President  elects Francisco Guterres, a 24-year veteran of East Timor’s resistance to Indonesian occupation.

Mr Guterres is keen to forge neighbourly ties, and is particularly concerned with improving the welfare of veterans in the fledgling Timor Leste.

In Brisbane, the Catholic Church is playing a prominent part in both creating goodwill and assisting veterans re-integrate into civilian life.

As a sign of close ties the new leader presented Archbishop Mark Coleridge with a traditionally-woven Timorese scarf and the two men embraced on the steps of the cathedral.

“It was a warm welcoming moment,” Deacon Gary Stone, who has been instrumental in forging relations with Timor Leste through his Veterans Care Association, said.

“And during the Anzac parade we marched as one contingent (Timorese and Australian veterans). “

“After they had marched, the Timorese veterans were given a place of honour on the saluting dais.”

Mates4Mates helps military service personnel transition into civilian life – a task that can be tough for veterans and their families and might require the support of a mate.

Deacon Stone said the Timorese veterans returned home with ideas and inspiration to develop their own celebrations to mark military service and ways to care for veterans and their families.

“They can take back a vision of how the RSL and a whole range of veterans’ groups have built up niche capabilities to support the veteran community,” he said.

Mr Guterres will be sworn in as the country’s fourth president later this month.

Fifteen years after independence, Timor Leste’s key oil reserves are running dry and the government is struggling to resolve a long- running row with Australia over lucrative energy fields in the Timor Sea.

The article was written by Mark Bowling for The Catholic Leader. Reproduced with permission. See the full article here.