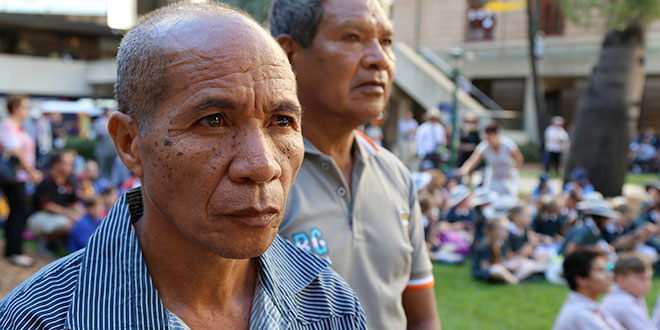 Last week Mr Buti mingled with Australian students and veterans as he and 30 Timorese veterans accompanied his country’s President-elect Francisco Guterres on a visit to Queensland to strengthen veteran ties and take part in Anzac Day commemorations.

In Brisbane’s Anzac Square last Monday, he met Australian students who marvelled at him and several of his veteran companions, when they were told of the struggle Timorese guerrillas endured in a long and dangerous occupation by Indonesia.

Year 7 students from Our Lady’s College, Annerley, attending the Brisbane cenotaph for a student Anzac Day event of April 24, honoured the memory of nurses who have served and died during wartime.

The students recreated the Australian nurses uniform worn during the Second World War.

The six students represented 25 nurses who died during the war.

“It’s to remember all the nurses as well as soldiers who served in war and see that those who died have the recognition,” student Seattle Stiller said.

“We’d like to be grateful for everybody who served in wartime and made our country what it is today,” student Grace Pursey said.

In a predominantly Catholic East Timor, Mr Buti was among veterans separated from their families for years.

According to Church records the death toll from fighting and from Indonesian military killing of civilians reached more than 200,000.

Many observers have called the Indonesian military action in East Timor an example of genocide.

In 1999 when Indonesian militia forces unleashed a final reign of terror on towns and villages, Mr Buti and other guerrillas living in the mountains were ordered to remain in cantonment and not fight back, in order to maintain international support for their resistance cause.

He said it was one of the hardest orders he ever had to follow.

Since independence in 2002, Australia has been helping East Timor rebuild its armed forces, and there is a warm friendship between the veterans of both nations.

In Townsville, the Timor Leste veterans visited Lavarack Barracks, home of the Australian Army’s 3rd Brigade which provided the nucleus of the INTERFET deployment to Timor in 1999 and Operation Astute in 2006.

Timor Leste’s Minister of State Agio Pereira, said: “This visit builds on a friendship reaching back to the Second World War when the Timorese at great cost assisted Australian commandos. Women in focus: Students from Our Lady’s College, Annerley, honour nurses who served and died during wartime. Photo: Mark Bowling.

“This friendship has been strengthened by ongoing connections with the INTERFET soldiers who witnessed first hand the devastation of our country, and in recent years has broken new ground with the relationship between our veteran communities and the success of the Timor Awakening initiative.”

It offers a program of renewal and rehabilitation for 200 Australian veterans and 140 Timorese Veterans, centred around immersion experiences of 11 days duration in Timor-Leste.

“The bonds between the Australian veteran community and Timor Leste are a fine example of what can be developed in a spirit of friendship characterised by cooperation and mutual respect,” Mr Pereira said.

Dr Ian Marshall, Australian president of the Order of Malta and Timor Leste’s honorary consul in Queensland, said the visit was one step towards improving services for Timor’s veterans.

“Timor Leste has a department of veterans affairs but it does not have a RSL (Returned Services League,” he said.

“The Queensland RSL has a strong interest in mentoring and fostering them.”

Dr Marshall said the Order of Malta’s work in Timor Leste had included re-establishing an ambulance service, building an orphanage and a world-class clinic.