Caring for Families in Crisis 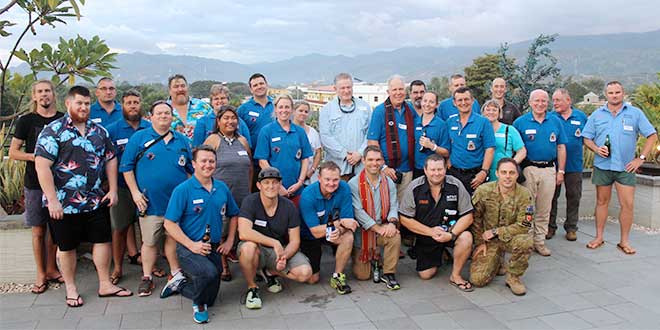 DEACON Gary Stone and his team from Veterans’ Care Association work around a lounge room table, in a Kelvin Grove house that doubles as an office and a drop-in centre.

Deacon Stone is chaplain to the veteran and ex-services community, and since VCA was set up 18 months ago, there’s been a rapidly growing demand for their services, which include holistic health education and individual assistance.

The work has expanded to include caring for families of veterans in crisis.

Brisbane archdiocese has the highest concentration of veterans in Australia, with 70,000 living here, or approximately 25 per cent of all veterans nationally, and from Department of Veteran Affairs figures, 35,000 of these experience some form of disability as a result of their service.

Today, 30,000 young veterans from recent conflicts live in the archdiocese, and for many of this group healing the unseen wounds of war and settling back into civilian life and family settings presents a daily struggle.

Deacon Stone speaks about the program called Timor Awakening, which is funded by RSL Queensland.

It’s a year-long holistic health and wellbeing program for veterans, with a 10-day trip to East Timor as its centrepiece.

The trip builds camaraderie between veterans, offers care and support, and engagement with the Timorese people, especially their own former guerrilla fighters and veterans.

The feedback from more than 40 participants during two trips so far has been overwhelmingly positive.

Former infantryman, Kev Neal from Warwick posted this reflection on social media: “… finally see how our help has let this country grow and develop into the free and happy country it is.”
“… on my trip made it easier for me to get the closure and the feeling of accomplishment from my service in Timor Leste.”

Deacon Stone said the program was open to anyone who has served in the military or police.

That includes Vietnam veterans – the group which first brought PTSD to the attention of the Australian public, including the high rates of ex-service suicides compared to the general population.

“Timor is just the setting for the circuit breaking part of the program. So using a history that goes beyond any contemporary veterans – including Vietnam veterans,” he said.

“To my mind the essential issue is hope. For a long time veterans and their families have felt despair and abandonment because the treatment arrangements for them have not delivered desired outcomes.

“Classic medication or cognitive behavior therapy is not helping most people. We have a more comprehensive range of treatments, most of which is called psycho-social – people helping people.

“It’s the good Samaritan story – one wounded digger helping another. It gets people going.

“We’ve cottoned on to a holistic approach of treatment delivered by veterans themselves which has been well received and is reaching some positive consequences for them.”

The resources come from RSL Queensland, with the program developed and delivered by VCA and Deacon Stone – who draws on his own extensive military service in overseas campaigns including Iran-Iraq, East Timor, Bougainville, the Asian tsunami, Solomon Islands and East Timor.

Son Michael Stone is a former army major, who was considered the army’s “fix it” man in East Timor.

“Ex service people will listen to other ex-service people. Michael and I both got diagnosed with Post Traumatic Stress, we’ve been in the dark hole so we know what it is like for them, whereas if they go to a civilian psychologist or psychiatrist and they don’t reveal what is really going on, they don’t trust them or they are not ready to reveal,” Deacon Stone said.

“It is the coming back, the reintegrating into life that’s difficult.

“Veteran suicide happens when they haven’t got hope. Either they are not in touch with God, or feel they can’t be forgiven.

“I tell them ‘God loves you’ and you can be forgiven.

“God made you for a purpose, and you have purpose yet. There’s nothing God can’t do.”

Brisbane Archbishop Mark Coleridge is an enthusiastic supporter of the Veterans Care Association.

He has encouraged every Catholic agency, parish and school to find ways to honour veterans and their families during DVA Veterans Health Week which runs from October 23-30.

There will be a Veterans Health Week Stall in the grounds of St Stephens Cathedral on Tuesday, October 25 from 11am to 2pm.

Article written by Mark Bowling. It was featured on the Catholic Leader Website 24/10/16 Click here to see the original article.