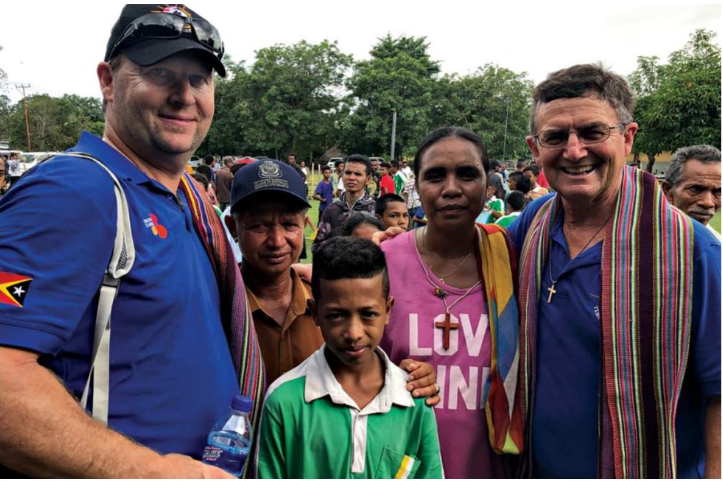 A Catholic veteran has found a renewed joy for life, after returning to a Timorese village where he was caught in a gun battle with enemy militia 19 years ago.

It has taken former Corporal Greg Murty many years to come to grips with the incident, and which has caused him great distress and trauma. He lives with his family in the Brisbane south-side suburb of Parkinson.

“Being a young and proud soldier… I went to their country thinking I was making a difference, but returned to Australia with the feeling of a heavy heart and feeling defeated,” Mr Murty said of his deployment to East Timor soon after the country’s vote for independence, and a violent aftermath.

“I was very naïve… I was unaware of their struggle for independence nor their struggle under the hands of the Japanese in World War Two.”Corporal Murty celebrated his 24th birthday soon after arriving in East Timor in April 2000, as a member of the international peacekeeping force sent to stabilise the country.

He found the fledgling nation in chaos – hundreds of thousands of people had been herded across the border and were being held in refugee camps in West Timor, by violent militias bank-rolled by the departing Indonesian forces. Corporal Murty was a member of a platoon sent to patrol and protect the remote and rugged border region. He recalls working hard to win the trust of the local village people, particularly in Aidabasalala where he was stationed most of the time.

“They (the East Timorese villagers) were stand-offish at first, but once they realised you meant no harm they were very interactive, building shades and shower areas for us out of local materials,” Mr Murty said.

“I took any opportunity to mix with the locals, even going to their school behind our patrol base and interacting with the children, teaching them English, songs, with their teachers permission.”

Several months into his mission, just after mid-night on June 21, Mr Murty was at the end of a watch shift at his village patrol base when his unit was ambushed by armed militiamen.

“Their intent was to kill all Australian soldiers,” he said, recalling an initial grenade explosion, and then the chatter of automatic weapons firing.

“I got on the radio to headquarters immediately and told them we were under attack and needed reinforcements.“ At that stage we were on our own. We thought they (the militia) were inside the wire.

“I really didn’t expect to survive that night.” Mr Murty said the battle “felt like an eternity”even though the battle probably lasted only a few minutes. However, the short encounter left a lasting impression on a young soldier, who suddenly had been betrayed by the villagers he had come to know, and even his own army comrades.

“After that night I had so many thoughts, why didn’t the locals inform us? “ Mr Murty said.“And, why did the militia try to kill us when we are here trying to help the Timorese people? The “icing on the cake”, according to Mr Murty, was that Australian army reinforcements were supposed to arrive in ten minutes, after he had phoned for help.

“They ended up taking 45 minutes to get to us. At that time we would have been dead if we’d been waiting for them,” he said.“I felt unsupported. All alone, as if nobody had our back.“It was only five days before I came home to Australia and I honestly didn’t think I was going to survive those five days.”

On the morning after the militia attack Mr Murty visited a church to pray, accompanied by an army padre. He said the feeling of betrayal lingered. And there were other questions on his mind.“Why weren’t we injured or even killed?” he said. “What’s God’s plan for me?”

At that testing time, Mr Murty phoned his fiancée (now his wife Belinda), confided his fears,and surprisingly, asked her to marry him.“She said yes,” he said.

Back in Australia, Mr Murty said he considered“going AWOL”, refusing to go back to Timor.“ But I thought, I don’t want to look like a coward, so I’ll go back and do my job,” he said.

Back in Aidabasalada, and at his lowest mind-set, Mr Murty said the children “kept me going and gave me hope”.

“I would walk out of the patrol base with another soldier and teach the children English,”he said. Mr Murty admits it had taken many years to come to grips with his deployment in Timor. He and Belinda have three children Ryan, 15, Shaun,13, and Gemma, 8. The breakthrough came in February this year, when he joined a Timor Awakening tour, led by Veterans Care Association, Deacon Gary Stone and his son Mick Stone, both former army officers.

“I was given the opportunity to return to Aidabasalala, after 19 years,” Mr Murty said. The moment I arrived I had extreme anxiety and stress. My emotions were high. “My heart was pounding. I had a very strong feeling of fight or flight.

“I was extremely fortunate to have my wife Belinda by my side and she could sense my emotions and held my hand tight as we walked into a shower of praise and welcome from the locals.”

Mr Murty said his first impression of the village was that it had not changed much – maybe a coat of paint on the school.“The school kids came and sang to us their Timor Leste national anthem and their veterans song. I looked at the children before me and notonly were they all singing beautifully, but they were all wearing a school uniform,” he said.

It dawned on Mr Murty that indeed quite a lot had changed – these children had a nationalanthem, school uniforms, and, most importantly, a certain future.

Mr Murty said the feelings of betrayal and mistrust that he had harboured for so many years suddenly disappeared, replaced by forgiveness.

“The Timorese have been through so much themselves. How can I not forgive them?” he said. Mr Murty spent time walking through the village, inspecting shrapnel marks left in some of thewalls from gunfire, and meeting people, including a teacher who still remembered his visits to the school.

He said he was thankful to share his emotional return to Aidabasalala with his wife, Belinda.

“I hope this allows me to be kind to myself and work on what actually matters in life and that is family,” he said.

“I was once in darkness with this event. But now I am coming into the light.” Following the visit to Aidabasalala, the Timor Awakening veterans attended Mass and Holy Communion in nearby Balibo, the border town where five Australian newsmen were captured and killed by Indonesian soldiers in 1975. More than 250 veterans and partners have now received healing through the Timor Awakening rehabilitation program.

“Like Greg and Belinda they all experience our holistic health education and experiences tailored to nurture the body, mind, soul, and relationships and are offered life coaching for a future full of hope,” Deacon Stone said.

This Anzac Day, Mr Murty will march for the first time in Brisbane alongside his Timor Awakening mates and a contingent of Timorese veterans who had hosted his experience earlier this year.

If you know a veteran needing help, contact Veterans Care Association on support@veteranscare.com.au

Article written by Mark Bowling for the Catholic Leader. You can read the full article here